Once again, as with 10GHz, I had started to dabble with ATV back in ZL4 land. Back there amateurs had access to UHF channel 39 (~ 610 - 622MHz). I built up a transmitter on this channel using a standard A-V sender as a modulator/low power exciter to feed a 2.5W amplifier. It was located at another Amateur's home location on the Otago Peninsula. It was a beginning and a number of stations around the Dunedin basin could receive its signal. But before I could progress to a 440MHz input to create a repeater, life went head over heels and I ended up moving to Australia.

Getting established in VK land took a while and the discovery of Mini-kits in Adelaide run by Mark, VK5EME, got me on track again. I purchased ATV kits for 440MHz and 1250MHz. 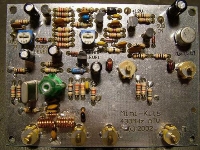 The 440MHz transmitter is yet to go on-air. The 1250MHz unit transmits ok with a 50mW output and work is in progress to house it and boost the 50mW up to the 15W level using Mitsubishi power block modules.

In early 2005, I met a new ham on-air, Jack, VK2TRF, and after some chatting it was apparent that he was keen on getting into UHF and microwave activities. It wasnt long before he was collecting gear to start operating ATV TX and RX on 2.4GHz. On 20 Aug 2005 we had our first serious trial, from Faulconbridge (on the Grt Wstrn Highway) to Southhead Lighthouse (at Sydney Harbour entrance). This was a distance of 75 km and a new personal record for Jack and I on this band. The gear is a dipole antenna at the focus of a 22dB gain Gridpac reflector. It is fed by a 25W Amplifier and a PLL'ed modulator/exciter. Jack VK2TRF can been seen using the 2m talkback link. Over this LOS path it was a good P5 pix to VK2BV (club call) who were using a 60cm dish and a circ. polarised antenna. This was just a single direction transmission. See the Path Map 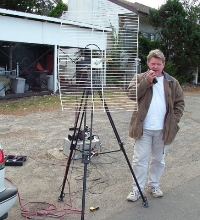 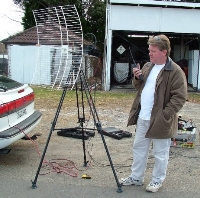 Our next outing was on the 5th Nov. 2005, from Peats Ridge (Central Mangrove area) north of Sydney down to Mt Gibraltar near Mittagong. Johnathon VK2TAS was at the southern end ("The Gib") of this 150 km link.
That doubled our previous record !. The weather was miserable, a intermittant drizzle was falling and it truely soaked the foliage that Jack and I had to beam and receive through. Considering the conditions, we were pleasantly suprised with the P3 - P4 pix in both directions. See the Path Map 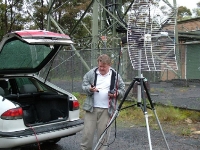 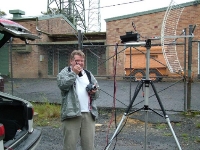 The next hilltop session was on the 18th Dec. 2005. We met up with a group of amatuers from the Westlakes ARCand we all piled into several of their 4WD's and headed up into the Watagan Mountains NW of Morrisset, eastern NSW. It was a great day, some time was spent finding a good location with a clear view to the south.
Once again, Johnathon, VK2TAS was on Mt Gibraltar, at the southern end of this 174 km path. Thanks to the Westlakes club members hosted Jack and I wonderfully with the transport and lunch provided. And in return we introduced them to some long-haul ATV. See the Path Map

Left to Right ... screenshot of the signal from VK2TAS P4 with a bit of speckling. ... some of the gang
Jack and I (me on the left) 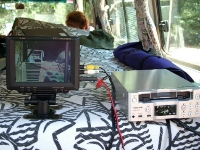 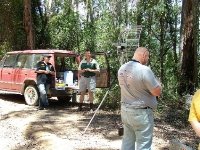 Below is my 5.7 GHz ATV transceiver. It is based around a video sender TX/RX pair. The units have been rehoused and the patch antennae replaced with coax connectors to be able to be used in conjunction with a high gain horn or dish. Jack-VK2TRF and Dan-VK2GG have already used their these units to work over 70km with a P5 pix. They have ~ 15mW output and a reasonably sensitive receiver. Jack and I intend to
use our TX section to drive a VK5EME 1W transmit amplifier. My first distance test will be on the 18th Aug 2007 (Saturday of Lighthouse weekend). From Faulconbridge (in the Blue Mtns) across the Sydney basin to Southhead Lighthouse, distance of 74km.
Unfortunately for some reason that test wasn't successful. The next hilltop test was on May 17, 2008. This time over a 22km path from Sugarloaf Rdg., western Sydney to Top Ryde, inner West Sydney. Syccess !!, we got perfect P5 pix in both directions. Both transmitters were ~ 16dBm (~40mW) into a 15dB gain horn at my end and a 27dB gain gridpack style reflector at Jacks site. The next planned test is for 31 May '08, Jack will again transmit from Top Ryde and I will head out to Faulconbridge, a distance of ~ 55km. As of 29th May, I have built up the 1W amplifier and its ready for power up and testing. Its going into a box with a single TX module. The module currently has a power out of ~ 12dBm (~18mW) will will have to be attenuated down to a max of 5mW to drive the 1W amplifier. 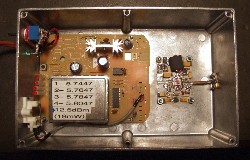 In the left pic, note that the original thin teflon coax that fed the patch antennae has been removed and replaced with something more substantial in this case with UT 141 or a teflon coax of similar diameter. This has a wonderful effect on TX power out and presumably also on receive sensitivity. I have used SMA connectors, N-Type could also be used.

Below is my 10 GHz ATV transmitter. It uses a Microwave Assoc. Gunnplexer, so very popular in the 70's and 80's for WBFM voice comms by many hams worldwide. It has a 10mW output. The PSU/Modulator circuit is a close copy of the commercial ones used for the 24 GHz TX pictured below. The BB (composite video) is applied to the regulated PSU of the Varactor Diode. For receive, I'm using a Philips Satellite LNC retuned to the 3cm ham band. The DRO has been retuned to 9.00 GHz so that 10 GHz = 1 GHz on a Satellite receiver. 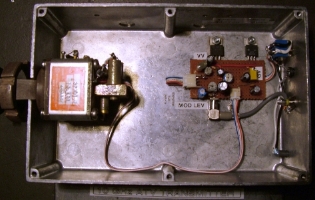 Update, 11th August ...
... First on-air test of the transmitter (away from the workshop) between Jack-VK2TRF near his home in Northbridge and myself at Sandy Bay near the Spit Bridge (both estrn Sydney). Just a short distance of 2.5km. With 17dB horns at each end, Jack received a P5 testpattern picture, not too suprising, but at least I knew my TX was working. Jack placed a 20dB attenuator inline at his end, which reduced my signal to just a B&W picture. After some calculations, things look good for next weekend's Lighthouse Weekend activities (18Aug07). For this activity, I will be at Faulconbridge in the Blue Mtns west of Sydney and Jack will be at Southhead Lighthouse. This is a distance of 75km.

Saturday, 14th July, 2007, was my first serious transmission test for 24GHz ATV. Jack and I were at Tania Park, on Dobroyd Pnt near Sydney Harbour entrance. Dan, VK2GG was at Wybung Head, on the NSW central coast. The distance was 76 km. We were using 23GHz MA/COM Gunn oscillators retuned to 24.150GHz running 60mW conservatively into 800cm dia. dish antennae. The receivers at each end were DB6NT - MKU LNC 24 A, ATV Converter that comes out in the Satellite receiver band on 1 - 1.25 GHz.From there into a Synth'ed 23cm receiver and a LCD A/V monitor as seen in the video clip. See the Path Map
Watch videoclip of the signal from Dan to us. 070714atv.mpg .... WARNING 12.6Mb 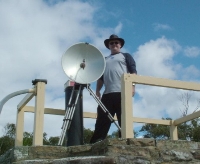 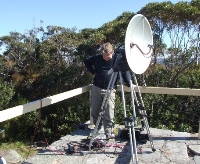 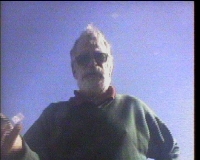 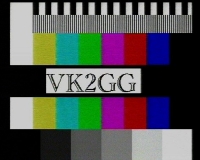 Below is my 24 GHz ATV transmitter. It is just the TX section out of a Microwave Radio Corp. "Whitebox" Data transceiver. I removed the RX Gunn, mixer and waveguide stages.The BB (composite video) is applied to the regulated PSU of the Varactor Diode. The Gunn Diode in these units is pretty gutsy putting out a minimum of 60mW. It is being fed to the dish seen above which is giving ~ 38dB gain. 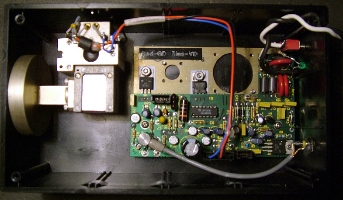