A Visit to The Hawai'i Lava Flows

This was the beginning of a 3 month trip to the USA. I stopped in Hawai'i on my way to the USA mainland
The first 2 nights I had in Honolulu where I did some sightseeing including an awesome 30min. helicopter
ride over the greater Honolulu area.
I then flew to Kailua-Kona to meet and stay with fellow amateur seismologist and friend Tony Potenzo. Tony
took me for a tour of the "Big Island" first stop was the HVO (Hawaiian Volcano Observatory) where we go
out back to see some of the research and seismo recording gear that the general public dont get to see.
Around the HVO area we also visited the large rift opening up; the fault trace from a M6 event several years
earlier; the main Kilauea Cauldera and several others; and a fumerole area. We then drove across to Hilo
and met up with a friend of Tony's and he took Tony, another friend and myself out to the lava flows on the SE
coast of the island. This is definately classed as one of my lifetime highlites !!.

We drove as far as we could before walking out across the older flows below which the town of Kalapana once
stood. Finally after ~ 1.5 km we got to the area where the lava was currently flowing. This stuff is HOT, very hot
well in excess of 1500 deg C. We were walking across cooled lava that was molten maybe within the previous
10 hours and it was still 700 - 800 deg C and quite hot under foot. One of the guys had a hand held digital
readout infrared thermometer that he was able to aim at areas of the rock and find the coolest routes to walk.

We stayed at the flows till well after dark and watched the red rivers lava flowing over a ~10 metre cliff and into
the sea. The stars were shining overhead with the sounds of the hissing of steam as the lava hit the sea and
the constant crackle of the cooling skin of of the lava. It was a truely surreal experience.

After a night back in Hilo, we did a trip to the top of Mauna Kea and had a look at all the big telescope installations.
This is about the highest place in the world that you can drive to, 13,979ft amsl., way...way above so much of the
moisture laden atmosphere making it an awesome site for telescopes.

Walking out across the old flows towards the active flows, Kalapana is below us !

Left - Me scooping up lava in a soup ladel; Centre - Me beside the flow; Right - a flow leading edge 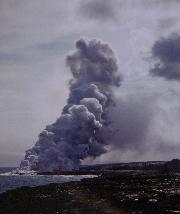